The judges were impressed that Sven had come up with a sustainable idea and made it work, and that his designs have potential for large scale production. The fact that Po-Zu doesn’t use glue in its shoes (thanks to their particular construction) is a positive feature that could be implemented by other footwear producers with no significant cost increase. Po-Zu has deliberately not patented its core designs or production methods so that other manufacturers can follow its sustainable vision and apply those ideas to benefit a wider audience and the planet.

Po-Zu shoes use sustainable, non-toxic, renewable and bio-based materials. The company supports local producers and chooses to source materials from small family businesses over large conglomerates. For instance the cork comes from areas close to its factory in Portugal (which operates on 43% renewable energy), the hemp from family farms in Italy and the tweed from traditional hand weaving mills in Scotland where local wool and vegetable dyes are used.

The footwear industry desperately needs to clean up its act as it is one of the most polluting industries globally, hence Sven’s passion and vision with Po-Zu will hopefully contribute to a positive shift in the way shoes are made and produced.

As part of its sustainable strategy Po-Zu currently donates 3% of online sales to environmental charities, and they plan to increase this proportion further as the company grows.

More about the PEA Awards

The PEA (People & Environment Achievement) Awards in association with The Co-oprative Group and Friends of the Earth Charity, was set up in 2010 to recognize individuals who are making a difference through leadership and innovation in the transition towards a more sustainable world.

“High street brands have made efforts to produce greener consumer goods and sustainability has moved higher up the political agenda, both of which are to be welcomed. However a lot of what needs to be done is happening at grassroot levels. We must change policy and how major companies operate, but we must also alter how we think and our culture norms. The PEA winners and runner-ups are at the forefront of that process”.

Other members of the judging panel include Jo Wood, Josephine Failey, Chris Shearlock, and Joe Jenkins from Friends of the Earth.

Since its launch, Po-Zu has produced and sold over 50,000 pairs of shoes across continental Europe, UK, North America, Far East Asia, New Zealand, and the Middle East. A presence in high-end department stores, namely Holt Renfrew in Canada, Isetan in Japan, and John Lewis in the UK validated Po-Zu at a crucial period in its evolution. Last season’s collaboration with Timberland to design and produce a dual-branded range was a high point.

Po-Zu’s original shoebox was nominated for the UK Green Awards 2006, for best packaging. The biodegradable coconut box can be used as trays to grow seeds. As the plant grows, the entire packaging can be planted into the ground where it will decompose and turn into earth.

Following its commitment to produce products that are as non-toxic as possible, Po-Zu launched in 2007 a shoe cream that is so safe- it can be eaten! Apart from treating leather, the Edible Shoe Cream is also an all-in-one beauty product that can be used as a lip balm, skin moisturizer, hair conditioner, massage oil and cooking oil. You can even spread it on toast for a nutritious snack.

Timberland and Po-Zu joined forces in 2011 to take eco-conscious footwear a big step forward by producing a dualbranded shoe range made from biodegradable components, which are also recyclable. The shoes were designed to be easily disassembled, so that by the end of their first life, can be sent back to Timberland where the parts are then recycled or reused (where possible) to make new pairs of shoes. 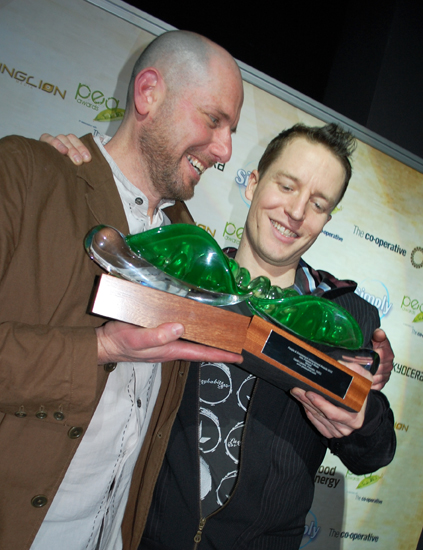 Sven and Gav together...Gav from THTC also won an award on a different category...