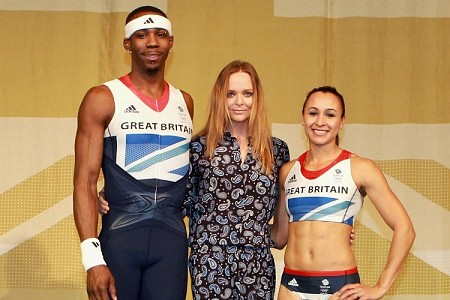 It is the first time in the history of Olympics that a fashion designer has launched uniforms of the national Olympic team and she will oversee the design of both athlete kit and fan wear for the Olympic and Paralympic Games.

Stella McCartney will forever have found a place in history as a fashion designer associated with sourcing eco-friendly materials to create her clothing, accessories and fragrances, and now she will be written in the history books for designing the Olympic kit for the athletes.

The miles of spandex material will be used for all the athletes costumes who will be attending the 2012 Olympics and the Paralympic competitions set for London. A total of approximately 175,000 different type of items of clothing will be launched for up to 500 Olympic and 350 Paralympic athletes and includes 38 types of footwear.

Stella stated the following about her design selection,

"For me [the Union Jack is] one of the most beautiful flags in the world and it was important for me to stay true to that iconic design but also to modernize it and present it in a contemporary way."