Fabulous Flags: The glittering tradition of voudou flags reminds us of the beauty of Haiti and its people 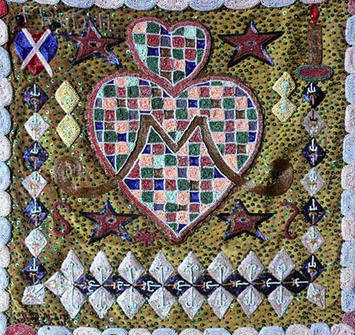 To many of us, “needlework” conjures up images of grandmothers, maiden aunts, and war widows working on antimacassars and altar cloths. In Haiti, however, needlework means vivid visions of saints and devils, curses and prayers, even African goddesses transformed into colorful images of the Holy Virgin. Needlework and vodou go hand in hand.
It may surprise you that vodou maintains a strong community of master needle workers concentrated in Croix des Bouquets, Haiti. In opposition to our images of spinsters at their darning, most of these artisans are men -- the lean, strong, descendants of Africans who, in spite of the brutal dislocation of slavery, brought their religion with them. The embroiderers are vodou practitioners themselves. Working with apprentice craftsmen, the vodou masters create intricate ceremonial flags (drapo in Creole) and other sacred objects to be used in the elaborate ceremonies celebrating every aspect of life and death.
Each piece is drawn out on a base fabric, and then painstakingly embroidered with beads and sequins over the entire surface of the flag. Often these pieces are in excess of 36” x 36” and require innumerable hours to create. The colors and designs on their surfaces celebrate the images of a rich culture.
The practices and images of vodou have developed over the centuries from the mixing of traditional West African animist beliefs with indigenous Caribbean culture and the conversion of both of these groups to Catholicism. Most experts believe the basic beliefs of vodou come from the African Yoruba and Caribbean Taino tribes. And along with these beliefs came a tradition of bead working and ceremonial adornment. (Throughout Africa you can find similarly adorned ceremonial “flags” which incorporate local beliefs and materials – such as the safety pin aprons found in South Africa and the asafo banners of Ghana.)
As in most ancient religions, animism celebrates feminine and masculine energy and personifies it in its deities. The gods and goddesses of ancient Rome and Greece each represented an aspect of humanity to be celebrated, or perhaps feared. Animism is no different.
With the ability to give and sustain life, feminine energy is especially revered. There are many roles of the feminine – mother, daughter, sister, lover, healer, confessor (priestess), and provider (nurturer). Vodou celebrates these female images with special verve and has merged traditional goddesses with celebrated images of Mary, the Mother of Christ who is a central theme in many vodou creations.
Erzulie is the vodou goddess of feminine energy. With the incorporation of Catholicism, images of Erzulie are now associated most often with images of Mary. However, Erzulie has incarnations which represent all of the traditional feminine roles. To justify its (Catholic-influenced) commitment to the monotheism, vodou has had to adopt specific images to represent these different roles. Erzulie Freda represents Love and is usually depicted by the Catholic image of Mater Dolorosa. Erzulie Danthor stands for Motherhood and Protection and is represented by the Black Madonna of Częstochowa. Often photographs of these images are incorporated in the drapo and surrounded by the elaborate geometric symbols, or veve, of vodou. All of the imagery is executed with the finest needlework, and beautiful control of color and texture through innovative combinations of beads and sequins. There are so many beads on an individual piece that a flag can weigh over five pounds.
Haitian art didn’t really find its voice until the formation of the Centre d’Art in the 1950s. Under the direction of Dewitt Peters, an American ex-patriot, Haitian art in all its forms were encouraged and introduced to the world stage. This included vodou needlework.
Needle workers and bead workers are excellent at adapting their skills to materials available. In Haiti, the availability of sequins and European glass beads allow artisans to add a dimension of color and texture not previously available for this type of work. Availability is limited and inconsistent, which seems to encourage a constant flow of creativity in order to make do with what is at hand without sacrificing quality or meaning.
Artisans have adapted and applied their techniques to many objects both religious and secular, and in doing so have created a vibrant international market for these skills.
Vodou-inspired beadwork can be seen on everything from the traditional drapo to chairs and boxes and even handbags. This art form has inspired designers from a variety of cultures to work with the artists of Haiti. Lawrence Peabody, Sherri Donghia, and many others have found inspiration in the needlework here. And as the world grows smaller, artists of this region are incorporating the new iconography of the international culture into their work. From Botticelli’s Venus rendered in the finest bugle beads to Disney’s Jasmine morphed into a vodou mermaid (La Sirene), artists such as Jean-Baptiste Jean-Joseph and Georges Valris continue this tradition and show the evolution of an art form and a culture.
The tradition is very much alive.

Comment by Helen Milen on January 28, 2010 at 12:19
A beautiful tradition indeed. Thought provoking article too.
Thanks again