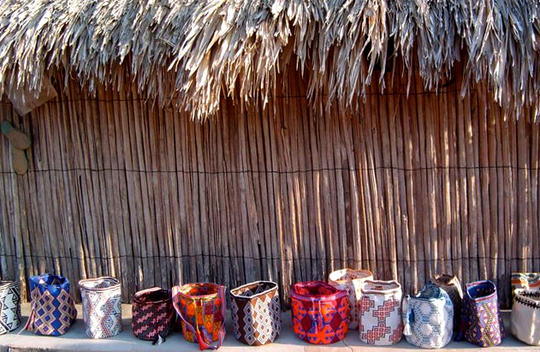 Fashionistas like Tory Burch and Ralph Lauren are just now discovering spiral-woven mochila bags and offering them in their boutiques. But the matriarchal Wayuu people of Colombia and Venezuela have been weaving them for generations – both for their bright, geometric beauty, and for the deep spiritual message they convey.

The Wayuus see no borders; their territory is Colombia and Venezuela; their nationality, Wayuu. Much of their territory is rich in salt, coal, oil, and gas. But among the Wayuu, weaving is as important a resource as mineral wealth because it expresses their myths and oldest stories in its geometric designs.

In Colombia there are approximately 200,000 Wayuus and in Venezuela 300,000 -- the largest indigenous population in the country. A desert nomadic people, they take their water from La Rachería River in Colombia, El Limón River in Venezuela, and from artificial ponds that are filled during the rainy seasons. Because water is so valuable, the Wayuus move with the seasons. During dry spells in Colombia, they cross into Venezuela where many work and trade in Maracaibo. Once the rains come, they return to Colombia.

A traditional Wayuu settlement consists of five or six houses made up of caserias or rancherias. Each rancheria is named after a plant, animal or geographic range. In a territory that contains several rancherias, house-names come from the mother's last name, a nod to the matriarchal traditions of Wayuu culture.

Women are the foundation of Wayuu society. They are healers, or piache, able to talk to spirits via dreams, in order to attract the rains, eliminate bad spirits, and pass down their traditions to the next generation. These ideas are all expressed in their arts – most importantly in their weaving. For the Wayuu women, weaving--in a literal and a metaphorical sense--is the thread that unites families and clans. Chains of pattern are as communicative as words and sentences; and these words and sentences narrate ancestral dreams, legends, and myths. These are the stories of their daily lives and customs in the vast desert they inhabit. This is the information which forms and enriches their identity, and which keep them together.

Because of the Wayuu’s predominantly female perspective, girls are trained on all aspects of womanhood at a very young age. At the onset of the menstrual cycle, the girl is required to enter a period of seclusion. During this important rite of passage, the girl's head is shaved, she is fed a vegetarian diet known as Jaguapi, and is bathed frequently. At this gateway to adulthood, she is taught by her elders about sewing, lovemaking, motherhood, and the many secrets that bond them as a people.

For some Wayuu girls the dream is to leave their close-knit matrilineal communities and venture out to the cities, but many of their peers see another alternative--a bright economic future in the handmade mochila. These colorful crochet bags with their complicated geometric motifs are now sold by adventuresome specialty retailers, bringing some income into Wayuu communities.

Mochila bags take about a month to complete and they are intimately linked to Wayuu life and their philosophy. They represent a circular cosmology where there is no before and after, but only threads of life spun from one cycle and woven into the next. Mochilas are also practical in everyday life and are used to carry food, water, and even the woven hammocks known as chinchorros.

According to legend, Wayuu weaving tradition comes from Wale´kerü, the spider that taught them how to weave and create drawings, in which “. . . threads of many colors came out of their mouth…she used to weave all night and every day a new drawing spoke of their dreams.”

Wayuu designs have geometric and repetitive pattern, each one has a meaning directly linked to their worldview. The surrounding desert, animals, and natural elements all serve as major sources of inspiration for both design and color. Materials used for all woven or crocheted work include cotton, wool, pita fiber, straw and horse hair. The women use various methods such as weaving with looms and crochet.

The use of vibrant color is important in the Wayuu artisan tradition and folklore, as each hue represents an element or an emotion. This use of color is seen in all Wayuu woven material, including the wide mantas the women wear, which have bands of turquoise, gold, pink and white. Red is considered their strongest color that symbolizes all that is good; yellow represents the sun; blue is the ocean; orange embodies tranquility, while white is purity, and black conveys sadness.

For the Wayuus, life revolves around the chinchorro. It's in these large woven hammocks where they give birth, sleep, eat, have sex and die. Visitors are welcomed and receive the finest chinchorro available. The dead are buried in theirs and new couples start married life with one of their very own.

Life does not end with death for the Wayuus. Their belief system is based on a cycle that life continues through different transitions, making burials are one of the most important rituals that bring their community together. The dead are buried with their belongings, and after two years the body is exhumed, incinerated, and the ashes placed in ceramic at the clan’s cemetery. Thus, the cycle of life starts anew in which Wayuu traditions, values, and convictions come full-circle like the spirals in their intricate weavings.

Rebeca Schiller and Keith Recker contributed to and edited Circle of Thread.

Comment by Tamsin Lejeune on January 27, 2010 at 19:42
Thankyou Hand Eye Magazine, another fascinating contribution to the blog
Tamsin