Today I assisted Danielle Sprecher, Costume Curator at Colchester and Ipswich Museums and Catherine Newley, Assistant Curator for Community History at Colchester and Ipswich Museums to set up an exhibition called: Straw: Bonnets to Boaters, at Hollytrees Museum Colchester. The exhibition will open on Saturday 25th September and will run until 27th February. I had previously re-boxed all of the hats during the summer and it was so exciting to see them all come together for an exhibition. The exhibition is very important in itself because it consists of twenty straw hats ranging from 1830s to today; the hats are from Colchester and Ipswich Museums. In the collection are two very rare hats, and they are the Quaker bonnet and an intricate Tuscan straw bonnet. These I didn’t re-box and document because they had to be sent away to get repaired due to damage. They also got a special mould made for each of them and a box that they are to be stored in. Another treat that is in the collection is a fascinator which was made by a woman in Colchester. They have been a growing choice in recent years and have replaced hats when it comes to wearing something for a special occasion. I was told by Danielle that the fascinator was made about four years ago and consists of pheasant feathers from Witham and straw plait, and had previously featured in the Channel 5 programme “Make Me a Supermodel”. I asked Danielle where the pheasant feathers would have been bought (as all of the materials needed to be local) and apparently her butcher, from Witham, gave them to her.

There are also 3 paintings from Ipswich’s art collection on display which include a woman reading on a couch by Philip Wilson Steer. Not only this but there is a small display focusing on the lost Essex industry of straw plaiting and the tools and techniques involved in making the plait. I did not assist in setting up this part of the exhibition.

Setting up the exhibition was not what I expected, the glass cases had been installed already by “qualified” people, so our job was to paint the walls. Once the paint had dried I carried large tables up from the basement with Valina B-Burns, who was also helping set up the exhibition (Valina works in the Castle museum). We needed the tables to lay the hats on so we could unpack them and mount them. Our next job was to get the hats, which were in the resource centre, so Valina and I transported the hats over on a trolley. On our third trip the lift in theHollytrees Museum broke so we had to lift the trolley with the hats on, up two flights of stairs. Once we delivered the hats to Danielle and Catherine, we made up the 18 stands for the hats to sit on, each stand had a ball of paper on top, and this protected the hats and padded them out. While Valina and I made the stands, Danielle and Catherine unpacked the hats and mounted them. On a previous day I had made the little cards with the photos on that went with each hat. After lunch it was time to decide where the hats went, so we spent the next few hours arranging them in a way that looked good at every angle. We also had to make sure the hats were all visible when you first walked into the room. To get the position of the hats right we each walked out of the room and back into it, this way we could see it from a visitors first impression. We then walked around the room, we needed to see what hats worked best at different what heights, different hats where also on stands that were different lengths. Just as we were finishing up a few photographers arrived to take pictures of the exhibition and ask questions. I had a very enjoyable day and I learnt a lot about exhibitions. I will hopefully be able in incorporate this knowledge for when I do Graduate Fashion Week next year. 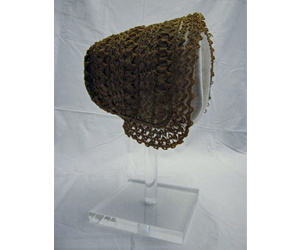 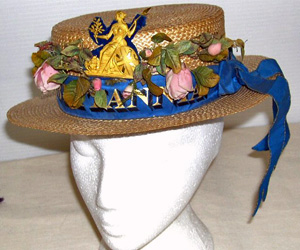