We didn't have the green thing back then

My uncle found this article and sent it to me in an email. It points out something very important about "the green thing".
The Green Thing
In the queue at the supermarket, the cashier told an older woman that she should bring her own grocery bags because plastic bags weren't good for the environment.   The woman apologised to him and explained, "We didn't have the green thing back in my day." The cashier responded, "That's our problem today. Your…
Continue

I have been researching and gathering ideas for our graduate fashion week display. One popular idea proposed was an old textile factory, which seems quite fitting. Some issues we face are is the space going to be confined or open, how do we hang our garments and what about the floor and theme. I thought I would try and develop the factory one more. Instead of hanging our garments we could have them in draws in cabinets and in baskets. We could get any cabinet no matter the…

The second idea for our graduate fashion week display was inspired by geometric shapes, Selfridges and a number of other stores had objects hanging from the ceiling and everything was very colourful. This could mean we need scaffolding and a frame up; this would also be used to hang clothes on. There is the risk that it would look the same as the previous years, but with the new burst of colour and shapes we could get away with it.

Here are my final ideas for my Premiere Vision Paris collection 2011. For some of the tops I have used short puff ball sleeves, while others take on the shape of some of the armour. The neckline is wide and stands away from the neck. The geometric shapes on the tops will not be achieved by seams but I will sew a layer of fabric over the top. I will be keeping the edges frayed to add to the over-all look. I want to use all of the colours in each garment so each pattern piece will be a…

I took this Alexander McQueen garment as a starting point for what shape I would use for my collection. The idea is to have a box shape, using the dart-less block, and incorporating elements of armour from the Wallace collection I saw. 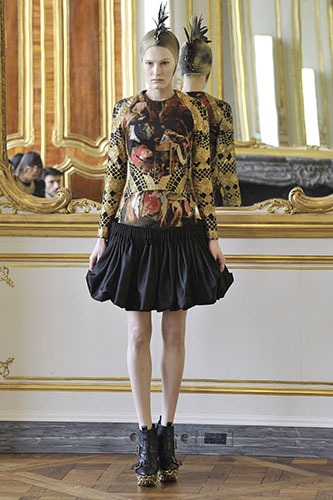 Fashion and Textiles Magazines make up a large percentage of the Fashion and Textiles industry. Consumers buy them to get the insight on new trends, see what celebrities are wearing, and giving new tips on remaking your wardrobe. What makes a magazine? There are the papers, mostly pine that take twenty years to mature, or alternatively the paper made from a non tree fibre, there may be a recycled content – that has been deinked and bleached, has the paper a gloss on, is it coated, what inks…

Colour Story Board for Premiere Vision

My colours were inspired by the 2011 Rodarte collection. It had beautiful colours of beige, redwood red, grey and a light blue. Mood Board for Premiere Vision

My new inspirations for my premiere vision collection were amour and a touch of Alexander McQueen. When we went to the Hampton court palace London I fell in love with the paintings of armour on the walls, there were also statues of Romans which sparked my imagination. My research on trends led me to the very dramatic collection of Alexander McQueen, his collection had new interesting cuts and very historically based. Sadly it was his very last collection he ever did in 2010. In order…

I have never been to London before on my own, well today I chanced it! My aim was to go to the Wallace Collection to get more research for my collection. After deciding I was no longer going to use angels and cherubs or anything church related, I needed to get as many photos as possible of Armour.  I had a very exciting day and I found many inspiring things! As I had some spare time I went to the other parts of the exhibitions and saw all of the amazing beautiful rooms…

For my Premiere Vision collection I want to do construction and print. The inspiration for my Construction is Alexander McQueen and the print designs will be digitally printed with angels, cherubs and roman armour. Here are some of the images I took from Hampton Court Palace. 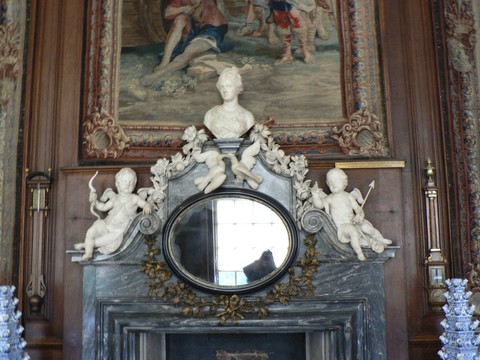 Katrina O’Brien, a fashion and textile design student at the Colchester Institute, has been working with the Colchester costume collection at Colchester and Ipswich Museum Service from July to September. During this time Katrina has assisted with our project to improve the documentation and storage of…

I am a Fashion and Textile Design student in Colchester Institute, when I initially entered the course I wanted to do Fashion design, but as the years progressed I wanted to do Costume design. However this was not possible on the course, I have now decided to specialize in Bridal Wear. My main inspiration is still historically based, I have…

Today I assisted Danielle Sprecher, Costume Curator at Colchester and Ipswich Museums and Catherine Newley, Assistant Curator for Community History at Colchester and Ipswich Museums to set up an exhibition called: Straw: Bonnets to Boaters, at Hollytrees Museum Colchester. The exhibition will open on Saturday 25th September and will run until 27th February. I had previously re-boxed all of the hats during the summer and it was so exciting to see them all come together for an exhibition. The…

Good news!! I won the Costume Society Museum Placement Award 2010. My placement will run from July to August. I am very happy to have won this opportunity and I can not wait to get started. I know it will be a huge benefit to me.