Columnist Mike Albo looks at the current state of ecofashion. 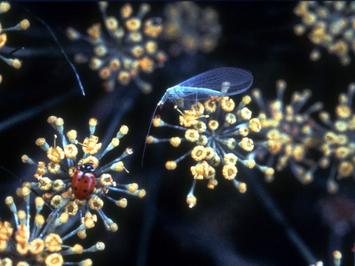 When you hear the words “eco fashion” what image comes to mind? Cameron Diaz in an $11,975 dollar organic dress on the cover of Vogue? Some message on a canvas tote? Maybe nothing at all?

Unlike other facets of the Green movement-- organic food, beauty products, home supplies -- eco fashion hasn’t made a big a splash in the public consciousness. It’s not as talked about or obsessed over. It’s the Green movement’s reclusive aunt.

There isn’t much diligence or attention to what eco fashion even means. “I went to Rainbow the other day to get my friend a cheap gift,” says Cary Curran, an actress living in New York, “and they had green shirts with glittered letters that said ‘Green is the new black.’ I don’t even know if it was organic cotton.”

The insiders have had enough. “Walk down the street, in the city, 2 out of 10 women will have a canvas tote with some kind of green message on it, like the “I’m not a plastic bag’ thing,” says Molly Garretson who founded Project Earth Day, an annual fashion show and student design competition in its 4th year. “Yes the message is getting broader and spreading, but it’s getting kitschy.”

This all may be about to change. The United Nations declared 2009 the International Year of the Natural Fibres and Stella McCartney was listed as one of Times 100 most influential people for her work creating cruelty-free, high fashion clothing.

Meanwhile, out in the fashion trenches, many eco-conscious designers are starting to find their voices. Mociun and Bahar Shahpar make gorgeous sophisticated clothes for women who can afford to wear them. Popomomo’s simple, adorable dresses and shirting are artsy in a Zooey Deschanel kind of way. Mottainie’s slick, put-together men’s clothing would appeal to cool choosy youth who wear Y-3 or APC. And, in the bright, eye-popping, work of UK-based Junky Styling, Eco fashion may finally have its Vivienne Westwood—a design collective that is giving sustainable clothing a noticeably different, innovative look that looks more like a cultural movement than a simple trend.

Still, its not like the garment industry is uniformly enthusiastic. Like any corporate beast, (see meat industry, health care industry) it is slow to change, especially when it involves lower profits. Just a glance at the boom in cheaper textile production in China is an indication that there is still a ruthless bottom line that supercedes conscience.

“I feel like there is a movement toward Green practices, but for my clients it's still about cost,” says Lisa Wisely a manufacturer and producer in Brooklyn who handles merchandising for large productions and businesses. Wisely is always trying to introduce “green” practices to her clients, but it is still an uphill battle “Basically it costs $7.75 for an organic tshirt. A basic cotton average shirt, dyed with chemicals is five bucks. In terms of bulk production, $2.25 a tee shirt is a big difference.”

“It's a dilemma,” says a designer at a large clothing brand. “Especially in this economy when companies are so obsessed with making their bottom line to the point where they debate whether or not to omit ONE button to cut costs. I don't think organic / green initiatives will be priority.”

It’s possible eco fashion has a harder time creating awareness because is so difficult for consumers to identify what actually makes clothing “green.” It’s not easy to fathom. “There are a million different things going into textile production, when you’re weighing the creation of a product,” says designer Bahar Shahpar. “You have fiber, you have processing, dyeing, finishing, production, trade, labor, transportation, shipping, packaging.”
Even within the organic industry, it’s hard to nail down what is truly organic. “Bamboo is being marketed as a natural fiber. But it’s bamboo dissolved in a strong caustic solution and extruded through a shower head type device,” says Johnathan Silberman, chair of Textile and Marketing at FIT.

Mainstream fashion hasn’t risen to the challenge in any kind of collective way. “Fashion doesn’t really want to be transparent,” Says Honey Berk, a manager at the Green Depot – a supplier of green home furnishing and products. “How much do they do that they don’t want you to know about? There’s no overall system demanding these brands really divulge their manufacturing practices. “

“You don’t know what chemicals are used to treat the fabric,” adds Paul Novack, a sustainable materials consultant for the Green Depot. “Moth proofing chemicals, flame retardant treatments. For clothing shipped overseas, the fabric is treated with mildicides so that they don’t get moldy on the trip over.”

At this point, the purchase of eco-clothing seems, to the pubic at large, more frivolous than political. Maybe its because clothing doesn’t enjoy the same visceral reaction – since you don’t swallow it or breathe it in. Rachel Sarnoff, a magazine writer, eco-activist and founder of ecostiletto.com, has the right idea – she created a short and eye opening YouTube video about all the chemicals it takes to produce cotton: “A third of a pound of chemicals is what it takes to just make one tshirt.” She also appeals to consumer’s health concerns: “60% of what we put on our skin is absorbed into our body.”

Maybe, in the end, eco fashion’s quiet time has allowed designers to perfect craft and experiment with technique. Shahpar’s Fall line, for example, includes plant-dyed fabrics, (using henna and elderberry, that have been speckled with iron ore from an old Italian mill with spellbinding results.

But quiet time is over. There is a need for a fashion-targeted Fast Food Nation or Silent Spring that exposes the toxic practices of the mainstream clothesmaking. The fashion industry needs to wake up. And get a long overdue spanking.