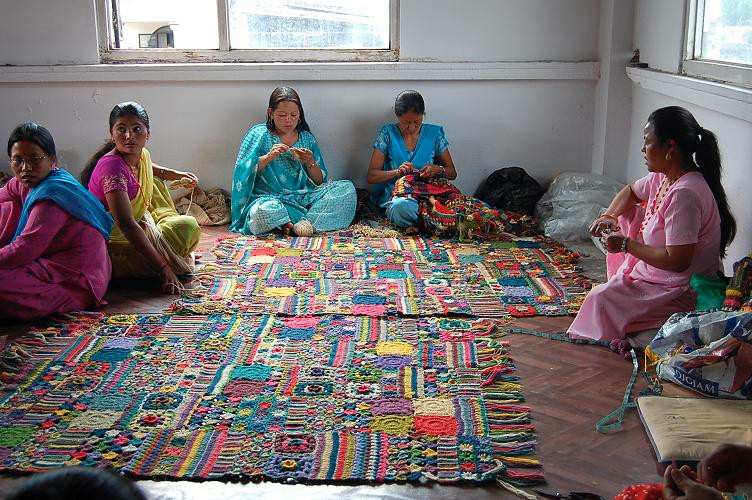 In the last blog I visited the small weaving co-operative of Dhankuta Women’s Handicrafts in Kupondele. It turns out there’s a good few Fair Trade and ethical Handicrafts shops in this area such as Dhukuthi, whose crafts are supplied by ACP.

I visited their office and factory where the initial and final stages of production are completed, accounting for 10% of total production including dying of raw materials for handover to the producers, final labeling and packaging. The other 90% is completed at the producer’s home.

I was taken for a stroll around the site which is split up into ten units, one designated area for each of the five production areas: Knit/Weave, Leather, Copper, Ceramics, and Felt. Within each area there is also a ‘Check Point’ unit which deals with Quality Control and Wage distribution also. All of these areas include stores full of zips, beads, pots everything you could need. I was informed that had there been a bomb, it is not feasible that they are prevented from providing work to the producers, so they keep a fully packed store just incase! Argh.

Initial processes such as screen and block printing amongst others are completed onsite, as ACP feel to ensure quality control and no deviances to the required work, that all raw materials are prepared ready for construction. It was also stressed that producers should not have to worry about trend, colour, raw materials, pattern combination etc, with the raw materials and patterns provided it is insured that no risks are taken. I can understand this level of control as they are producing on a fairly large scale and need to ensure consistent quality and also best use of time.

With regard to the working environment, this place has developed over the years into something pretty impressive; the units are mostly airy, spacious, and inviting. There are provisions, tools, top machinery, protective clothing and signage in each area. And, although I can’t understand Nepali its clear there are well presented signs in each area of the building, informing the producers about their rights and educating them about Fair-trade. To further inform the staff the ten key points are reiterated in the canteen in English and Nepali also! Many producers are uneducated and these signs enable them to know their rights at ACP and as producers too. Meera is also a bastion for Fair-trade in Nepal.

I noticed in the Block Print and dye room, which was nice and airy, the staff wore their protective aprons and masks, at least most of them! They chatted and the room felt more relaxed than other factories I have visited. I also noticed a group of women working from the floor who were cutting silk worms to remove the pupae. They have only recently introduced silk production, and are finding their feet at the process that works best. Before this they had been boiling the silk worms, which is a process used all over, unless you go for Peace Silk and the like. They said this produced an unbearable smell so they were no longer boiling but opening instead. This was really interesting for me to see. I never really choose silk for my designs as its too feminine and light and I really can’t imagine how many silk worms it must take to even make a meter of fabric, crazy.

On a personal note I wonder what people think when they see producers working from the floor. I have to say as a seamstress, at times it’s the easiest and most comfortable way to work. For all the awkward positions you need to do to get that stitch right, sitting upright on a chair with a flat table just doesn’t do it! I have even put my sewing machine on a skateboard so it could move it rather than moving myself, lazy or plain genius, I still don’t know.

Most of the units were bursting with activity, women at work, rolling and preparing beautiful felt flowers, or preparing felt fabric for flattening and eventual delivery to the producers. In the block printing area, the final touches to a selection of handmade table mats were being made, and in the potters area a group worked antiquing teapot details, and finishing handles too.

Regarding onsite work, Meera is very aware of the health implications from fumes and dust, and advises on compulsory breathing masks and aprons appropriate to the job. For example, no cotton aprons in the felt room only plastic, as cotton fibres may contaminate the felt production! Many producers are wearing the appropriate protective clothing, but Meera’s right pointing out that she cannot force them to do it properly. We all know face masks get agitating sometimes.

The majority of Copper, leather and Dhaka weaving is done at the producers’ home, in some cases workers live one hour to half a day away. Home working makes sense as we spent the majority of our time in Kathmandu covering the city on foot as its incredibly congested in and outside of the city, this is not viable for work though as it would take hours to get anywhere. But for knitters and some weavers they can work onsite as fewer tools are required, and they live just thirty to sixty minutes away.

There are community groups numbered 20 – 25 dotted all over Kathmandu and the surrounding hills. In each group there is a representative who will collect the work and distribute it amongst the producers from their home. He or she is also responsible for passing the wages onto the workers who in return will need to sign, confirming they have received the correct pay. This will then be checked onsite.

At each stage, initial, post home production and throughout final stages, the product is checked and if necessary, cleaned. As the work is completed in stages, it is possible that it comes into contact with loose fibres or dust through each stage and as quality control is an important aspect of ACP up to 10 checks are made.

When it comes to the environment, ACP has made adaptations to the machinery, and encouraged environmental awareness amongst its staff through. For example, water harvesting, dying and felting uses 300,000 litres alone, sludge water purification of which 80 – 85% passes to the river, the conversion of machines to work without kerosene oil, even food waste is composted and provided to the farmers, and fabric waste is used as stuffing!

I just read through the information Meera gave me and the Tools for Empowerment section is amazing. It’s got all the info about producer benefit packages, regarding financial and non financial assistance empowering producers. With packages including: Producers Saving Programme, Education Allowance, Producer Counseling Service, Paid Maternity/Paternity Leave, and Medical, Clothing and Emergency Allowance to name a few. There are all very detailed with eligibility judged over period of service with a minimum of 6 months for Medical Allowance, for example. The amount of financial support is worked out according to a specified percentage of the last year’s wages, and can change depending on length of time with ACP. They also have programmes that encourage the producers to come together and share their problems to further improve the Association, as well as acknowledging festival periods when there is no work and high celebration expenses, The Performance Award and Clothing Allowance support this economically demanding period of festivities.

In all, the producers seem really comfortable with one another and members of the ACP Team. As they pass by security at the end of the day, jokes are passed and everyone knows each others names too. In Meera’s eyes education is empowerment, this is the toughest year in 24 years because of the economy and even in these tough times the focus remains on the employees, the provision of work, the education of producers and their children, and the proud development of Fair-trade Nepali Handicrafts. 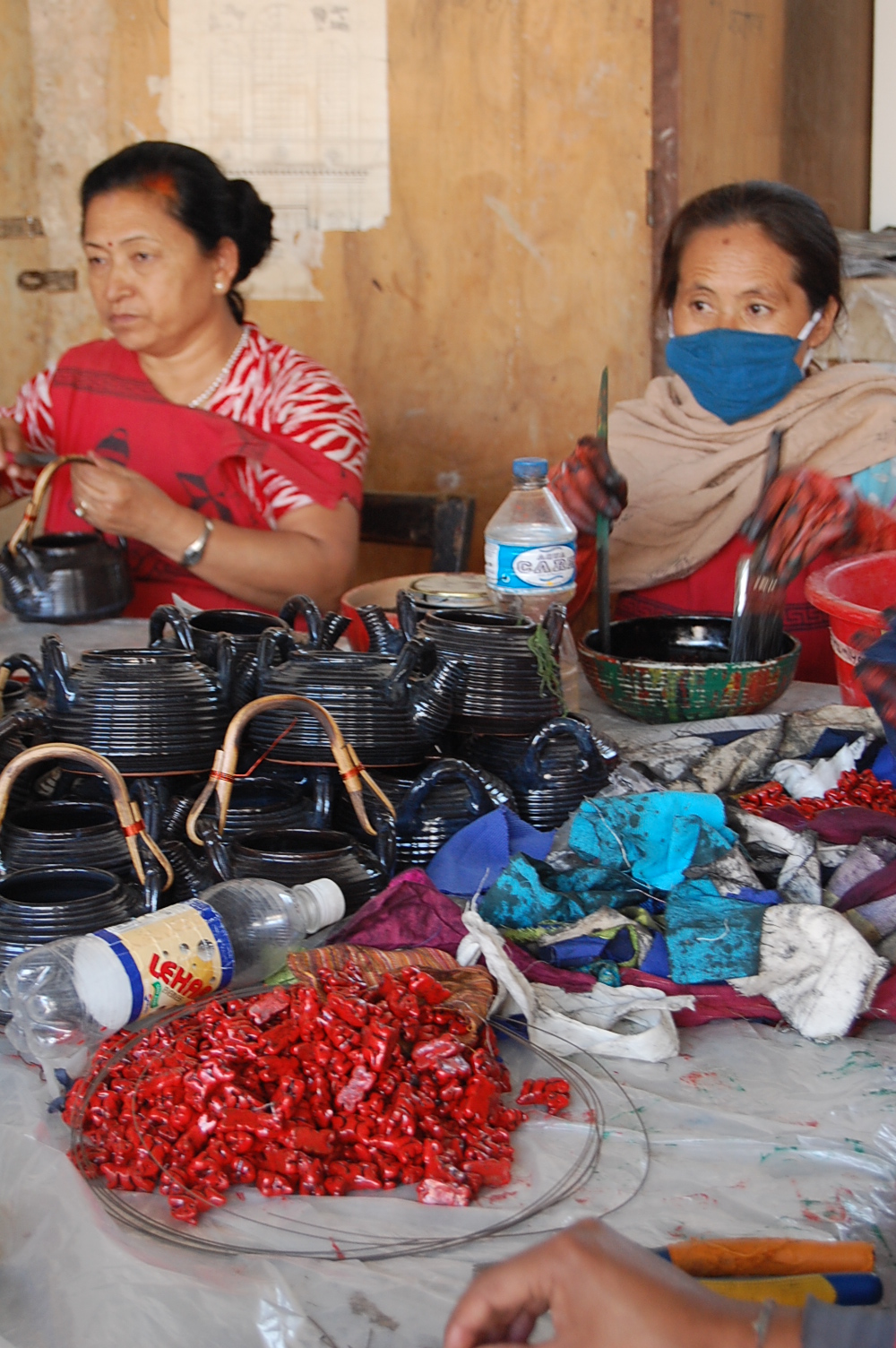 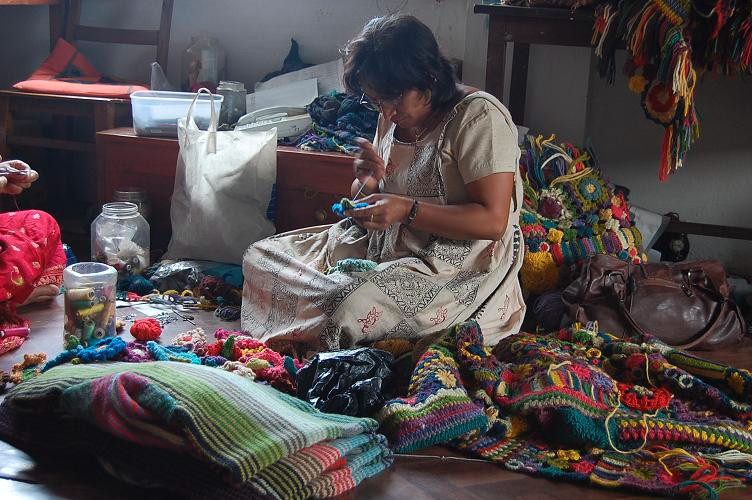 I am Ashok from Bikaner Rajasthan India. Here I work with 200 women artisans who have a wonderfull traditional skill of hand embroidery called "Bharat". I have contacted you to know about the possibilities of applying this craft on ethnic fashion clothes in order to achieve two goals togather-One is to generate sustainable livlihoods for poor women who perform the craft and second create awesome cloths for ethical fashion customers.can you help us do this?kindly reply.

Permalink Reply by Aoife Twomey on September 24, 2009 at 15:41
Hi Sarah, i also visited this organisation in april 2009 while on a research trip in Nepal with the National College of Art and Design, in Dublin. I was so inspired by how thorough the director was with workers rights. the women workers were not only paid a fair wage but education and health programes benefit the whole community. Students at the college in Dublin did a market research project before visiting which was presented to director. At ACP they were so welcoming and generous with their knowledge. I am glad to see information on this group is already available on the forum. I was planing on writing my own blog on the visit which would compliment some of your own findings. Part of my degree project used fair trade fabrics from the ACP factory. photos are available on my profile.