Is This Style's Sustainable Frontier? 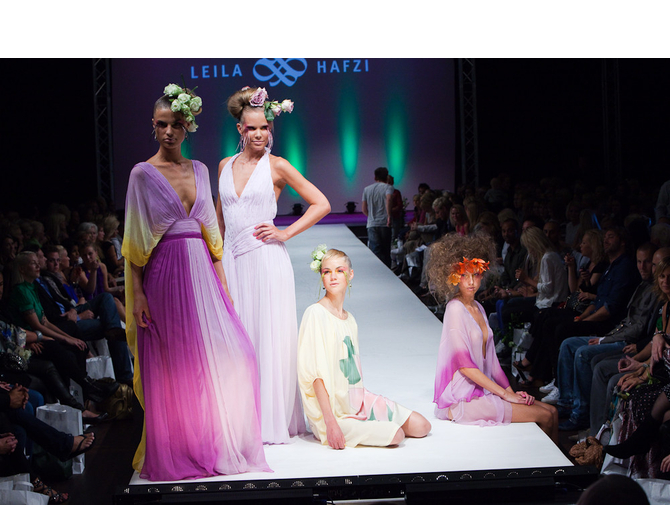 By VALERIA CRISCIONE
Some Norwegian designers will go to great lengths to grab the attention of the socially conscious -- even if it means making a dress entirely out of milk.

Per Aage Sivertsen, winner of this spring's Oslo Fashion Week designer award (Naløyet) in February and creative mind behind the Norwegian "eco-lux" brand FIN, plans to make part of next year's spring/summer collection from a gauze-like fabric based 100% on milk proteins. Making fabric from milk frees up land that would otherwise have been used to grow cotton, a crop vilified for its intense water consumption and high pesticide use.

FIN FIN's Olivia Dress, made of milk voile, priced at €569.
.
Mr. Sivertsen is one of many Norwegian designers now incorporating an ethical and social aspect into their fashion philosophy, one that goes beyond eco-labels. Three other nominees for Oslo Fashion Week's Naløyet award this year -- Leila Hafzi, Elton & Jacobsen and iiS -- have also prioritized issues such as workers' rights, fair trade and environmental impact in their collections.

Together, they are part of a growing social movement in the Nordic countries being led by NICE, the Nordic Initiative Clean & Ethical, created last November to promote the five countries as home to a sustainable and ethical fashion industry. It is the only one of its kind on a regional level and was a natural direction for an area known for its social responsibility.

"What we have in common as Nordic countries is the basic principle of behaving nice," says Eva Kruse, chief executive of the Danish Fashion Institute, one of the five Nordic partners in NICE. "It is in the core of our culture. So it's not that far-fetched to take the lead in this."

Nic Herlofson, one of FIN's founders, says the brand has always incorporated fabrics that have an environmental, social or ethical benefit, without compromising fashion. The company chooses textiles that are extremely soft and lend themselves to FIN's draped look, inspired by French sculptor Louise Bourgeois. Mr. Herlofson says Keira Knightley is a fan of FIN's organic cotton trench coats.

View Full Image
Leila Hafzi Several handpainters in Nepal work on Leila Hafzi's Peacock dress, made of 25 meters of silk and painted with Azo-free color pigments.
.
The company uses a wild nonviolent silk that spares the life of the silk worm. It takes organic yarn from Peruvian baby alpaca because the animal's small padded toes erode pastures less. It makes dresses out of bamboo, one of the quickest growing plants on the planet. And it buys carbon credits in projects that comply with the Clean Development Mechanism.

"It's not just an environmental thing, it's a social thing," says Mr. Herlofson. "It's the right thing to do."

Ms. Hafzi, an early Norwegian pioneer in ethical and sustainable fashion, started in the late '90s producing clothes in Nepal from wild nettles and recycled Saris. Now, her glamorous nettle gowns have been seen on red carpet awards ceremonies in Los Angeles on actresses like Katie Cassidy.

View Full Image
Stig Howard The final product, which takes six days to produce, priced at £2,400.
.
Ms. Hafzi's time in Nepal overseeing the workers inspired her collection, Equilibrium, featured at this past spring's Oslo Fashion Fair. The drapes on her evening gowns emulate Buddhist monks' robes. She has used a wild serpent and phoenix motif hand-painted on black silk dresses to represent the Ying and Yang, or equilibrium in nature, and an exotic palette of colors: delicate shades of purple and plum, fiery raspberry and deep, calm green.

She chose to work with nettle because it is one of the most sustainable raw materials and entails more handwork, and hence jobs, for women. The villagers walk seven days to a small mountain village near Tibet where they collect the nettles, cook it in ash, sun dry it on roofs and hand-spin it.

Elton & Jacobsen, another Naløyet nominee, says it does not use organic material in its collection, partly because it is hard to control if the materials are genuinely organic. Instead, its main concerns are workers' rights and shorter transport routes to limit environmental impact. The company buys raw materials in Italy, produces in Bucharest, and ships its trendy ready-to-wear line to stores in Europe, such as Topshop in London.

"Being a small design company, it's hard to control what's happening in India, China or Bangladesh," says Aashild Elton Jacobsen, one of the two sisters behind the brand. "When we started the company, it was always part of our business plan to focus on sustainability, but not a way to market the company. It's just a way of doing business."

Norway has been at the forefront of the new initiative NICE. It was originally envisaged two years ago by Pl Vasbotten, leader of Oslo Fashion Week, and Tone Tobiasson as the Norwegian Initiative Clean and Ethical.

The transnational collaboration was actually the more happenstance result of a lunch in March 2008 between the Danish Fashion Institute and Oslo Fashion Week to discuss the Nordic Look event at Riga Fashion Week. The Danes immediately took to the idea of expanding NICE to include the other Nordic countries because of the coming United Nations Climate Change Conference in Copenhagen, which will be held in December. The two Nordic fashion weeks, together with the Swedish Fashion Council, Helsinki Design Week and Icelandic Fashion Council, swiftly formed a Nordic Fashion Association and the "n" in NICE was swapped from Norwegian to Nordic.

The Nordic Fashion Association will hold a workshop on Sept. 1 in Copenhagen to kick-start the design competition that will take place during Fashion Summit 2009 on Dec. 9, timed to coincide with the U.N. climate change conference.

Afterward, the Nordic Fashion Association will travel in the autumn to each of the Nordic countries, along with the European director for Business for Social Responsibility (BSR), seeking feedback on a 10-year plan for the industry and Code of Conduct that will be signed at the Fashion Summit in December.

The question remains whether people are willing to spend more to wear less. It is cost intensive to develop new sustainable fabrics like milk gauze. Ensuring workers' rights usually means higher wages. NICE is hoping that costs will come down over time through collaboration, but it is not willing to wait until the market is there.

Nic Herlofson at FIN says he expects revenues will triple to $1.5 million next year, but the company doesn't expect to have a net profit before 2012. "I do believe that in good time the cost of being sustainable will be marginal compared to the benefits," says Mr. Herlofson, adding that the brand is working on being as cost efficient as possible.

"One of the first things I learned [in my doctoral project on corporate social responsibility and fashion] was that people don't always do what they say," says Stine Hedegaard, Danish Fashion Institute development coordinator. "It's not going to come from the consumers. It's got to come from the designers themselves."

—Valeria Criscione is a writer based in Oslo
Printed in The Wall Street Journal, page W3

Comment by jacqueline on August 29, 2009 at 18:41
i first spotted this milk fabric at the ethical fashion show in paris two years back ... its great to see it used in such a beautiful way