It was a unique experience that encouraged fashion buyers, celebrities, designers and press to interact together and raise awareness about sustainable style, and the impact that it has on our economy and the environment.

On Friday, Lupe Castro, ethical stylist extraordinaire hosted a talk informing the audience of how to transform one look into several for different occassions. She transformed one look from workwear, into evening and girls-night-out looks, just by changing the accessories and shoes.

On Saturday, Tamsin Lejeune, Director of Ethical Fashion Network, spoke about the importance of the ethical fashion movement in the 21st Century.

EFN has been very successful since it's launch as ethical fashion as been one of the largest economical movements in the last 50 years. In the 50s, fashion was seen as unattainable and for the elite. Between the 60s - 80s, overseas production took off, and as mass volumes were produced at low costs, fashion became more accessible to the general public. It was a great time for fashion lovers, but it caused problems as sweatshops, child labour, and low wages emerged, and factories started polluting the environment.

In the 90s, a new movement emerged from a generation of young environmentally and socially conscious individuals, which launched the ethical trend toward sustainable style. During this time, companies like People tree shifted away from mass production, and pushed for more organic and sustainable clothing. Ethical Fashion shows emerged, such as the International Fashion Show for Sustainable Fashion in Paris in 2004 and RE:Fashion awards in 2008. High-end designers and department stores, such as Stella McCartney and Marks&Spencers also started designing and stocking organic and fairtrade collections.

The Fashion Fusion Expo was very informative, and truly raised the bar on the importance of ethics and fashion, creating new goals and challenges for the industry and businesses involved, to take ethical fashion into the 21st century. Leblas Jewellery is proud to have been involved and will continue to raise awareness of ethical jewellery, and the impact that it has on the environment.

Check out some of the Ethical Designers and collections that were showcased throughout the event: 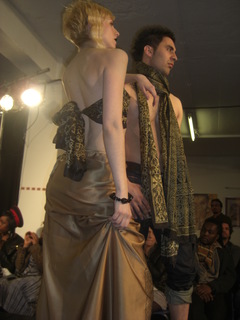