The following is an account of my own experience of a visit to The Association of Craft Producers, Nepal in April 2009

There are times when a person must see something in order to truly act upon it. Having travelled alongside decaying carcasses, abided with a corrupt road system and descending a beast defended drive way, I arrived at the Association of Craft Producers Nepal. In this haven we were greeted by Meera Bhattarai the executive director, and the drive behind the company with a compelling background in Social studies. She told us a brief history of the company, founded in 1984 through a determination to provide women with a platform to support themselves and their family in conditions unknown previously in Nepal. Originally employing 38 producers and 5 management staff the company escalated through successful fair trade to 1200 producers and 60 management staff. Producers are employed within various sectors of the craft industry, including textiles, ceramics, wood work etc. Producers mostly work from home within a system original to ACP. Raw materials are sourced locally if possible or from India and held in the factory. Here they are sorted, dyed and prepared for production. From here they are collected by producers and compiled into products. 70% of these products are exported into the world market, predominantly America, and 30% are sold within Nepal, Meera tells us of the effect of recession on sales.

With a particular interest in the sourcing of raw materials I ask Meera about how she initiated links between source and producer. I was disheartened to discover that all their cotton was imported from India and their wool from New Zealand. These links, she explained, were gained through the IFAT association. I wondered had they considered the use of organic cotton locally grown within Nepal. She enthusiastically answered that this was the next step and a plan had been initiated to grow organic cotton within Nepal. Having previously dealt with falsely advertised organic cotton, Meera stated that one of the most important aspects of the company was to keep it home grown. 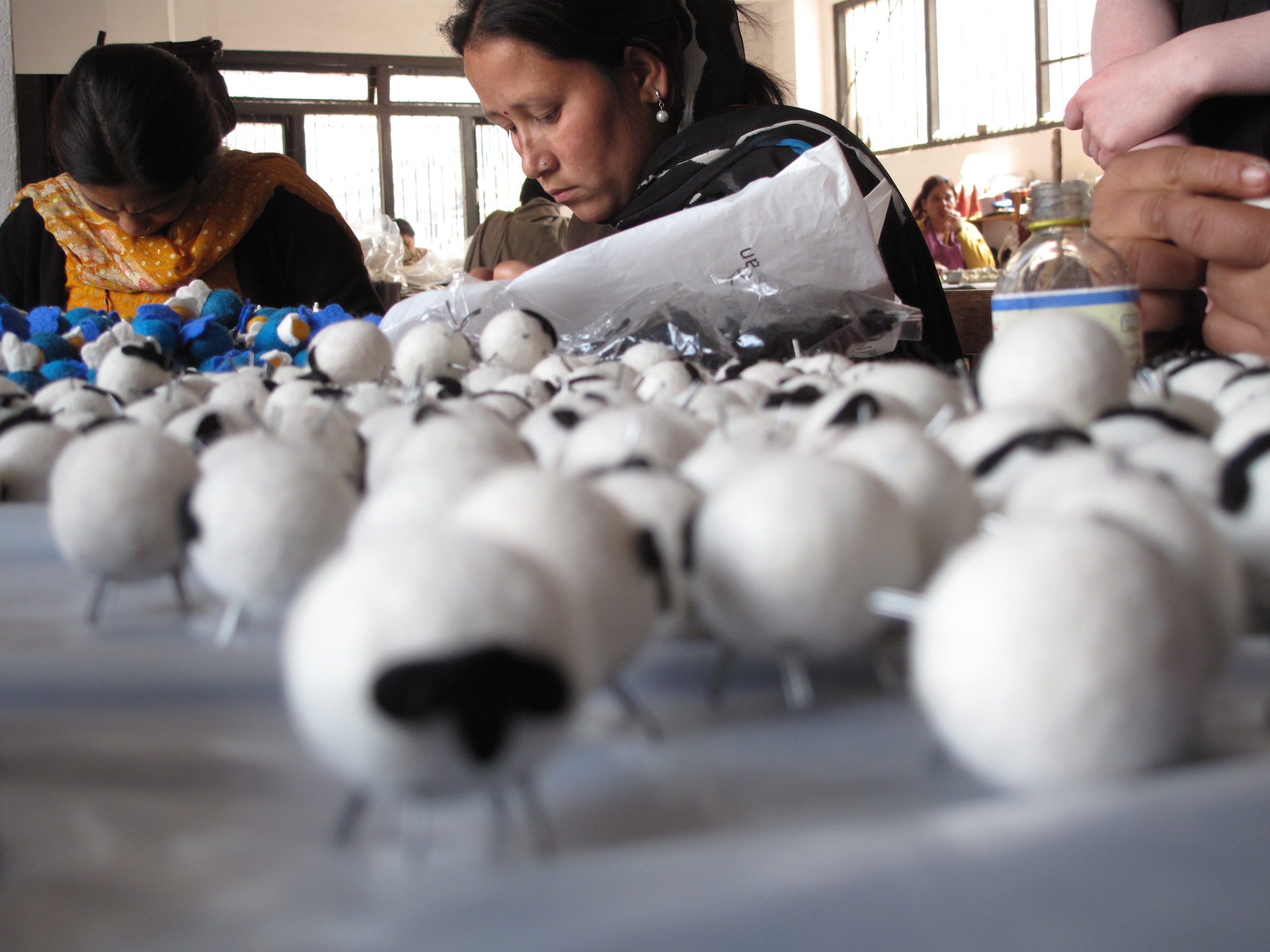 On touring the factory it was clear the skill level of the producers was astounding. And their conditions were impeccable. The products were comprehensive as a collection, but it was clear they needed updating.

One of the most inspiring aspects of this company is its respect for its workers. The programme director Revita Shrestha talked us through some of ACP’s benefits. Revita joined the company 11 years ago, having completed a degree in law and sociology. Revita’s job involves the constant assessment of the producers satisfaction. I ask if the company provides accommodation for its producers, she tells us that the pay covers the rent or household expenses. 50% of ACP workers live in rented accommodation. Included in the wage is festive allowance, with includes paid leave during the festival season. This also includes a rare case of maternity leave, 90 days paid, and paternity leave, 15 days. Revita explains this is rare in other non fair trade organisations other than government run jobs. One of the most successful initiatives run exclusively by ACP is its education programme. Through an application process each producer can apply for a child’s education scholarship. The applicants are fairly judged on their commitment to the company, i.e. how punctual they are with orders, time commitment and quality of produce, and how long they have worked for ACP. 40 children are chosen and put into schools for 3 years, it was decided that the child must be a girl. This initiative encourages families to send not only boys to school, and so their influence on empowering the woman in Nepal continues through generations. ACP also provide a pension service, this is built up through the years a producer works for the company, and is released to them at the end of their service, in order to maintain the family after the woman has seized earning. Various other systems were installed to maintain a balance within fair trade, for example a lunch party is organised once a year and health camps are performed 2 / 3 times a year in various towns, seminars on health issues are organised repeatedly through the year also, in an attempt to prevent the spread of disease. These benefits appear more worthy than the actual pay. Working 8 hours a day from 9.30 to 5.30 will see themselves and their families through day to day, but these benefits will see them into the future, and will continue through generations.


Those producers working from home receive the same benefits. On visiting the a selection of weavers in a small town called Kirtipur, I was reassured of the contempt nature of production. This sector of ACP is run by a lady called Laxmi. Her mother had originally set up the organisation and Laxmi herself had gone to university. On finishing her course she decided to take over her mothers practice having realised how imperative it was for women’s progression in society. In one house we met Keshari and Jugal Krishna, a husband and wife preparing a warp for the next stage of production. Though the work was monotonous, they worked together seamlessly with occasional infantile giggles.

Another weaver worked 5 hours a day in the hall way of her home. Here she appears the most comfortable as her family pass her constantly and she can keep her motherly eye over them. She loudly calls to her child upstairs who refuses to come down to her. It all seemed very normal, why would you not do this? Her speed and agility was unparallel and the huge roll of plain weave cotton was flawless. Our guide tells us of the language barrier between these women and town folk and herself, they have lived in this small community for so long they developed their own habits within a language that it is now differentiated from the original language.

After production is complete, all products are sent back the ACP factory in Kathmandu, at which point the worker is paid for their time and skills. Each product is finished, quality assured and put into the outlet store in Kathmandu for sales marketing. This store is appropriately named Dhukuti- Craft With Elegance and Beauty. Dhukuti translates to ‘Treasure Room’ and they were not wrong to call it so. The shop is bursting with nooks and crannies to search for gems. The four stories ooze with felt shoes, hand woven fabrics, ceramic elephants and an unimaginable quantity of quality goods.

Comment by Tamsin Lejeune on September 24, 2009 at 17:54
What an excellent and valuable blog post. We look forward to hearing more from you! Tamsin