2009 has been a productive year for the ethical fashion forum. take a look at some of our highlights..

It is now 5 years since the first meeting of designers and entrepreneurs around a table- which led to the creation of the Ethical Fashion Forum.

Back then, we could not have anticipated growing to represent a network of almost 7000 people in more than 70 countries, launching the first trade show for ethical suppliers to the industry, and founding an international competition for the most exciting emerging fashion designers working to high ethical standards.

Scroll down to read more about these and other highlights of 2009.

Visit our IMPACT page on the EFF website or EFF our impact_email.pdfdownload our 2009 IMPACT report

Support our work: Your donations and support are fundamental to the... 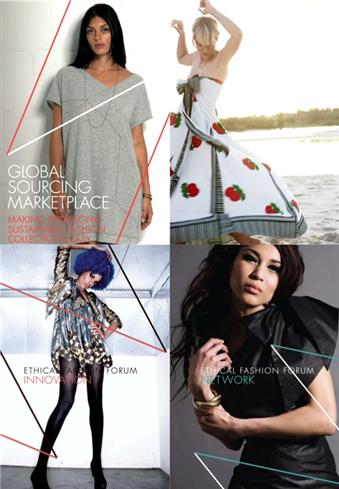 On the 20th- 21st November, the EFF launched the first global ethical sourcing marketplace for fashion, showcasing 32 inspirational fair trade and ethical suppliers to the fashion industry. The event was well attended by representatives from across the sector including Ted Baker, Topshop, Ascension, Monsoon, M&S and others- as well as many designers and smaller brands. See all details and exhibitor directory here

"We were thrilled with the connections made...” Jacobs Well, fair trade production facility changing lives in India - Exhibitor

Next year, we will be building on all your recommendations to increase the impact and value of the event.

In January the EFF launched the Ethical Fashion Network, an online platform which has grown to include more than 2000 members, from designers to fair trade suppliers, factories, students and press in more than 70 countries, in less than a year. The network allows members to share information, promote what they are doing, and connect. 55 groups have been created , from "fair trade suppliers" to "Brazil" to "the noble gents"- located all over the world.

“A great forum for connecting …we have shared expertise, received contacts and are doing business as a result.” Prama Bhardwaj, Managing Director, Mantis World. Ethical Manufacturer in Tanzania, in reference to the Ethical Fashion Network

Next year, we want to add to the network to make it easier for connections to be made , to increase its value for members.

In April, the EFF expanded its Innovation Awards to launch the INNOVATION international design competition, showcasing inspirational new talent in fashion design and sustainability. Applications were received from 16 countries in every continent in the world.

Supermodel Erin O Connor committed her support for the project and Roland Mouret joined the judging panel. Winners have been showcased in London, Hong Kong and Sri Lanka, and all designers supported have succeeded with orders. Widescale press coverage was secured from The Observer, Telegraph and Guardian, to Fashion Monitor, Vogue.com, Italian Marie Claire and Vogue Japan.

“Some of the most talented design graduates are now considering people and the environment when they create their collections. This competition will encourage more designers to follow suit.”

Next year, we want to expand the INNOVATION competition to make it easier for designers from around the world, who are changing lives, to apply, and to increase its profile and impact.

In January, the EFF launched a series of monthly seminars and master classes entitled SPOTLIGHT ON SOURCING: HOW FASHION CAN CHANGE LIVES. The series included topics from sustainable manufacture, to working with community & fairtrade suppliers, to certification and standards. During 2009, over 1000 fashion industry professionals attended 17 seminars, networking events and masterclasses held in London, at Rich Mix and Pure, and at Interstoff in Hong Kong.

Next year, we want to find ways, perhaps through partners, to reach more fashion people outside of London and outside the UK with training and marketplace events.

Through its work this year, the EFF has:

Support our work: Your donations and support are fundamental to th...

The party season is on, its time to to turn your meeting. You don’t need to come across  the hole changes up before a night , but at the same time, you don’t want to feel all stuffed up in a business suit either  compromise. So looking effortlessly cool .We’re here to help you!