Vote: Inspiring people to engage in politics through fashion

Think Act Vote is a campaign to

in the forthcoming election. 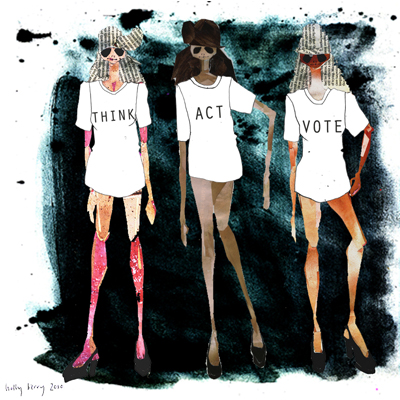 fashion label, you wouldn’t wear it. We want to use creativity to create a

community around the choices we make for our future.”

and coming designers, artists and illustrators. The only proviso is that the

design must include the words “Think Act Vote”. Submissions can be uploaded to

the Think Act Vote website before the deadline of 12 noon on Sunday 7th March.

An online public vote will determine a shortlist of 10 designs.

The winner will be decided by the Think Act Vote judging panel, made up of some

of the best-known faces in ethical fashion and design, including ethical hero

Katharine Hamnett said, “Thousands of people have died and are

dying all over the world for the right to vote. It is one of our most precious

possessions. Use it before we loose it.”

The winning design will be announced at a launch party on March 25th.

and in selected shops across the UK.

Runners-up will feature in a beautifully produced lifestyle book

alongside a creative anthology of people’s responses to one simple question,

future: “what’s the future you would choose”.

Find out more at www.thinkactvote.org