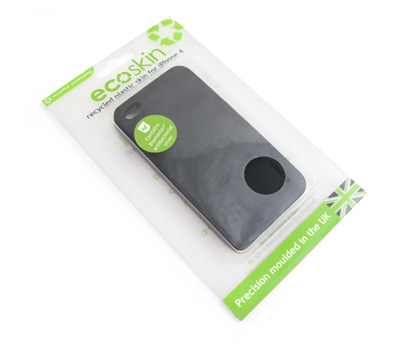 Anokimobi, the UK product company behind a number of eco-friendly and innovative phone accessories has just launched the iPhone 4 ecoskin™ - a precision-made cover produced in the UK from recycled high grade plastic and impregnated with silver ions to reduce bacteria levels on mobile phones.

The ecoskin™ features the same Biomaster® antibacterial protection technology used in hospitals after a recent Which Magazine report highlighted the potential for mobile phones to carry high levels of bugs.

Tom Tranter, Director of Anokimobi says: "Our existing e-pouch™ range of pouches and cases already addresses issues that our customers feel strongly about, being made from recycled plastic, organic cotton and bamboo.
"But we were suprised by what Which Magazine discovered about bacteria on phones and we have worked with the producers of Biomaster® to get this advanced hygiene technology into our products."

The ecoskin™ continues Anokimobi's tradition of being environmentally friendly as both the cover and its packaging are made from recycled materials and can themselves be recycled. Furthermore, the product, unlike virtually all its competitors, is made entirely in the UK thus also reducing its carbon footprint.
Tranter adds: "We know that as well as addressing their values and concerns, our customers want a great-looking and well-made product. We've ensured that the ecoskin™ is a superb fit and allows access to all the usual iPhone 4 functions; it's precision manufactured in the UK by the same company that makes components for Aston Martin."
ecoskin™

Mobile phones and bacteria
A Which Magazine report published on 27 July 2010 stated: "Mobile phones can harbour on average 18 times more living bacteria than a flush on a gents' toilet, Which? has discovered."
The report can be accessed at:
http://www.which.co.uk/news/2010/07/how-clean-is-your-mobile-phone-...
"Bacteria 'lingers on the surface of a phone which could then be passed on to other people if they held the handset to look at photos or other applications"
Telegraph, 28th July 2010
"The findings from a sample of phones taken by Which Magazine suggest 14.7 million of the 63 million mobiles in the UK today could be potential health hazards due to bacterium levels."
Daily Mail, 30th July 2010
Biomaster®
To guard against germs and bacteria for the lifetime of the cover Biomaster® is added to the ecoskin™ material; the same silver based additive used for many medical devices and proven to decrease bacterial levels by up to 99.9%. Biomaster® is produced by Addmaster (UK) Ltd of Stafford. A detailed explanation and video of how silver ion technology fights microbial contamination can be seen at: http://www.biomasteradditives.co.uk/benefits
Downloads: