A round of applause to Jill for winning last week’s #T-shirt Tuesday contest! Last week we asked our Twitter followers to name the airline with the highest…

I'm working on an income generation project with women in the West Bank making pyjamas (www.hopesew.org)- all the profit from sales goes to the women. We are trying to source ethically produced cotton from the region, either from Israel, Egypt, Syria or Jordan. Does anyone have an ideas?!! Thank you!

Just posted my latest Eco Fashion designer overview at www.ecofashiontalk.com on Banuq. My first listing on a men's wear company, but they so impressed me at the GREENshows in Berlin, I was persuaded to expand my resources and overviews into men's wear! Check them out!

Release: "Sourcing Ethically from India - An introductory guide for micro-enterprises and start ups in the fashion industry." 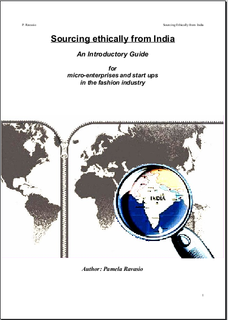 This is a 37 pages strong guide and the outcome of a 8 month research project in collaboration with small ethical fashion businesses in Europe.
It can be downloaded for free - under Creative Commons License - as PDF file from http://shirahime.ch/publications or from the following URL:…

Please take a moment to view our video clip, our new website will be available next week - for now there's:

We will be exhibiting at the PURE show, London, Olympia next weekend 12-15 Feb.  Please come and see our products we are at Stand A71, Ethical salon. It would be lovely to meet you there.

We are looking for suppliers of Organic Cotton knit in India. Anyone know anyone?!

Looking for somebody to represent my label at pure

I am looking for somebody who can represent my jewellery label - amisha.elegance.rebellion at Pure Women's Wear trade show Sun 13th til Tues 15th Feb. You need to be trustworthy and confident, with experience of trade shows.

Please e-mail me by 12pm Monday 7th Feb if you are interested - takeamoment@amisha.co.uk

factory equipment for fashion and footwear manufacture being sold at RIDICULOUSLY cheap prices.

Factory based in Northampton, UK.

Please get in touch for a full list of items left:  info(@)offsetwarehouse.com

Amongst other items, there are…

Anvil Knitwear, a leading apparel brand, has become the first US-based apparel manufacturer to join the …

In the forty-two years that followed, women embraced and embodied the courage, self-expression and ambition that Anne Klein's iconic lion symbol came to represent. Women became more empowered and reached mounds of success in the workforce that were only a dream when Anne started.

I am thrilled to share this feature on JEAN JOAILLERIE on www.fashionpaparazzis.com which is LIVE NOW and features my Eco-Friendly Bikini Bling !!!!

Is Bark Cloth the most sustainable fabric?

Bark Cloth (Lubugo in Luganda- which is the language spoken by the tribe that produces this cloth) is a non woven fabric made from the bark of the MUTUBA (MITUBA- PLURAL) Tree (FICUS NATALENSINS) and is produced by the Baganda tribe in Uganda. It was widely used in dress making and was widely worn by the Kings and queens of Uganda prior to the arrival of cotton which I think was introduced by Arabs or Indians.

The cloth is used widely in Uganda's Art and Craft industry, Traditional… Continue