How to cure shopping addiction 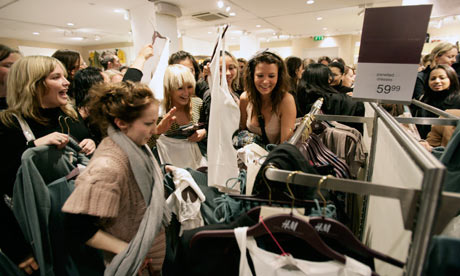 If we really are a nation of shopaholics, then maybe there's something to be learnt from studying self-declared shopping addicts. That was the premise behind a ground-breaking RESOLVE study which followed a small group of people trying to 'cure' their addiction to shopping using innovative 'mindfulness' training.

Shopping addiction, or oniomania, affects an estimated 8-16% of Britain's adults; that's 8 million people. The stereotype is that more women are affected than men. Research, including our own, shows this to be true. But if you include gadgets, sports equipment and computer accessories/software, then it's as prevalent among men and problematic.


Six self-confessed shopping addicts volunteered to learn mindfulness over an eight week period, and the changes in them were extraordinary. They experienced lessening of depression and anxiety that had driven them to shop, and reported feeling happier and more accepting of themselves.

Crucially, participants seemed to have a greater sense of who they are, and what they really needed on psychological and material levels.

They also reported feeling stronger, more able to understand the triggers for shopping urges, and to choose moment by moment whether they would indulge those urges.

Three months after the end of the mindfulness course, depression and shopping levels among those who attended the training had relapsed slightly, but not to the levels at the beginning. So although these results are positive and encouraging, wider social and cultural changes are clearly needed to support individual efforts.

The customers have to just realise  that they were blocked for true fiber and real color and virtue fashion. Whole new experience of some  5,000 years never again repeated in nature goods , this experience  is being missed  in synthetic and chemical  however they are appealing . The run behind the exiting and exoitic  not exclusivity in built is illusion sickness .They know not what they are having  till they realize.  The designers models , limited editions , premium goods  were all Nature Deficiency Syndrome caused in the affluent society .They reflected the time reality we are living with. Since last 100 to 150 years we are living with detached nature . Nature is  alive , fresh , variety , irregular,character , individualistic , exclusivity is inbuilt . On  chemical and synthetic fiber made dress it is added  it can not be inbuilt , with nature dress it is divine inbuilt .

Old millanium shopping ended  as growth is ended . We are going to be easy living , simple style , with minimal objects .

Objects purpose is to give experience , this experience if  4 corners building us it is fulfilling one. Body, mind, intellect and spirit . If it is superficially entertaining  we are just ahead  to meet troubles .

What are likely to be our future troubles. Holding  on to tail is not going to bring solution , but it will lead us to more troubles by solving one . For example in medicine  XRTP is a virus identified or invented  that cause the Fatigue Deficiency Syndrome. It was discovered 30 days ago and  later it was de discovered by another dozen doctors in Science magazine . Unless other wise you prove that XTRP is not right virus  no one can solve the issue . As a matter of fact, the real cause is elsewhere. We lost the capacity it see real fiber and true color and understand the virtue based fashion . Since  medicine science is based on wrong science  the virus issue is no issue . It is solution to invisible problems in invisible way. The root cause lie in the  method we are using to find solution.When the path is wrong  replacing cycle with power bike is meaning less. When the acute perception of  color and fiber and the power employment is useless.

Another example is chemical and synthetic garments as long as people believe to have value it is having value to individual as well to humanity its side effects which is pollution.Unfortunately the the modern consumer  with out change in mind  at shift along time  ,  they keep on going on the ignorance , one day they will meet the wall.To day whole world has met the wall for Growth, Shopping ,Technology to dig earth.  Had the idea is sound  the world would not meet this state of condition that we celebrate the fashion, hi- fashion and radiation  free radicals .The free radicals in the  fabrics embedded to make it shimmering , for science addict mind it is real , it is more than real under artificial light in Malls. Medicine is not ready to meet the wall  Science magazine misleading them to no real land . Fashion show is  misleading  public about their duty to keep the tradition alive . All tradition disappeared  that were based on false concepts . All business will collapse that were not covering poor. All economy will collapse if poor do not add quality in the jop they are doing.       Man is not body  alone . He is body, mind ,intellect and   spirit  the 4 corners .

Now body is 3 way poison polluted . Chemical, Bio, Radiation. Now body is destablilshed by DNA coding wrong s,Metabolish ruined, nural net work upset  owing to tension and stress  in work and home .Yet we run after  things what we are running after in the past millanium.

Easy living , minimal objects and simple style in Herbal health rich garments.In future replica of our ancestors life is going to be fashion , only evolved will rush . All others are waste, very effective in material accumulation and rat race  and totally dangerous even for existence.